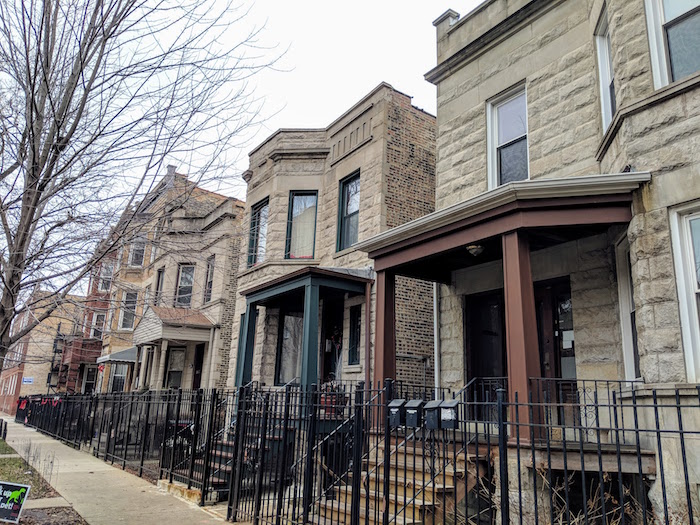 Chicago Real Estate is flush with many types of homes, ranging from single-family homes to multi-family buildings, bungalows, Victorian Mansions, and of course many high rise buildings.

One of the often under appreciated options are the Chicago 2-flat buildings. The great history of Chicago is built upon two-flat housing, brick by brick.

A 2-flat is a two story building with a legal apartment on each floor. Two Flats are also known as Duplex apartments in other parts of the Country. However, in Chicago a Duplex is defined as an attached single unit comprised of two floors with interior stairs connecting them both, typically in a condo building.

While Brooklyn is known for its quintessential brownstones and Philly for its row houses, Chicago is equally well known for its trademark of the 2-flat. In fact, the term two-flat isn’t even applied to real estate outside of Illinois.

A rich part of the history of Chicago two-flats were originally designed to be stacked apartments, rentable either in the form of 2 apartments or a single family home with twice the space.

These two story buildings were built primarily between 1900 and 1920. During a time when buildings were crafted with brick or greystone exteriors and intended to be the perfect investment opportunity.

Similar to a duplex, the building owner could live in one unit while renting the other unit, generating income. In the early 1900s, they were built to meet a growing housing market when half of the population was recent European immigrants in need of new housing.

Rather than building the city out, developers built them up. They were so popular at the time that immigrants who started out as renters, graduated to owners as their success in Chicago grew.

These apartment style buildings account for 27% of the housing market in Chicago. In neighborhoods like South Lawndale or Brighton Park, the 2-flats account for up to two-thirds of the available housing.

The sales are decreasing, but only because they are difficult to maintain and as such, many of being torn down for high rise buildings that put middle and working class residents out of a home. The future is bleak for such buildings even though they serve as an important part of the economic well being for the city.

There is increased demand for multi-family homes and rentable spaces for the working class. The construction of two-flats are of course, long gone, and saving these iconic staples for the local community is increasingly important. What’s more, they remain a valuable investment.

Why You Should Buy a 2-Flat

A Chicago 2-flat is great for financial investment because their original purpose remains applicable: you can live in one apartment while renting the other for additional income. If you don’t want to live in them, you can rent both out.

How Much Do 2-Flats Cost?

The cost is contingent upon the neighborhood, market demand and property condition. It is best to speak with an experienced real estate broker who specializes in multi-family real estate.

Are Two-Flats Being Replaced?

They are not being replaced outside of downtown but they are not being replicated either. They are a unique architectural facet of the city but they are slowly becoming too outdated to repair. Near downtown there has been a demand to turn them into single family homes or replace them with mid rise rental or condo buildings, which would make it more difficult for Chicago residents to find affordable housing.

They are good sized buildings at around 1250sf per unit with brick or frame exterior, with a single set of walkup stairs leading to an entryway. These stairs are situated inside they open into the first apartment and continue into the entryway for the second floor apartment. The rear of the home offers an open or enclosed porch.

The buildings otherwise are commonly Victorian in their design, with a great deal of character to the stately exterior. In some designs, the second apartment on top has a balcony that rests above the entryway stairs on the front of the building.

Are Basement Apartments Legal in 2 Flats?

Most basement apartments are not legal, you will need to check the zoning certificate provided by seller at time of purchase. However, if the unit is not legal it can be legal if you are willing to do the work. You can duplex (combine) the basement with the first floor unit to make it a large living space. You can also apply for zoning change to make the basement apartment a legal apartment.  Either option you will probably need a zoning attorney, architect, a general contractor and city permits.

These are the same style and design, but three legal units instead of two. Three-flats, as well as 4 flat designs were all an answer to the same housing demand among immigrants, building up instead of building out in Chicago.

Where to Purchase a Two-Flat?

Two flats are available in most neighborhoods in Chicago. As mentioned, they are a staple of Chicago Real Estate littered across this beautiful city.

If you are looking to invest in a two-flat building in the Chicago area work with an experienced company that has bought and sold multiple two-flat properties for clients before.

Jose Hernandez is an expert when it comes to Chicago multi-family real estate ensuring that you get the best deal on your property whether its two, three, or even a four flat property. If you are searching for a new property to live in or simply use as an investment vehicle contact Chicago Real Estate Source today!